PowerBoosts - Poll --> How far can you get on just electric? Has anyone tested to see how far they can get on just electric power? I want to know if I'm getting reasonable range out of my battery in electric mode.
Advertisement

For the average tank of gas, Electric is about 20% of miles, with a combination of city and highway driving. Highway only, the electric miles are far less unless I have a long decline (e.g., returning from Lake Tahoe, 8000 ft elevation). There are way too many variables to get into this. Going uphill, I can barely get the truck to roll. Going downhill, I could probably coast indefinitely fully electric. Level ground it will depend on the battery charge level when the engine shuts down.

This morning I was behind a dump truck going slow downhill and probably got an extra ½mi of all electric because I was able to charge the battery coasting/braking and then speed up slowly.

Lippy said:
For the average tank of gas, Electric is about 20% of miles, with a combination of city and highway driving. Highway only, the electric miles are far less unless I have a long decline (e.g., returning from Lake Tahoe, 8000 ft elevation).
Click to expand... No idea. I'd never try it I didn’t think it was a plug-in hybrid is it? As a standard hybrid I would not expect much in all electric mode.

That would be a cool upgrade for 2022 though! I like plug-ins as to me it’s the best of both worlds. Gas for the long trip out of town and all electric for most in town trips.
‘21 Space Lariat SCAB 5.0 4x2 501A+Adaptive+360+ProPower+Standard Tow+Locking Diff+Console w/ WS The truck is apparently designed to average 1 mile on electric drive.
Theoretically, the 1.5kWh battery would carry the truck 1 miles … here's "the math."
1 gallon of gas is the equivalent of 36 kWh of electrical energy
Ignoring drivetrain efficiency, the truck is rated at 24 mpg
That's 24 miles per 36 kWh …. 36 divided by 24 equals 1.5
So the F-150 Prius is rated at 1 mile per 1.5 kWh
Maybe that's no coincidence
In any case, the truck could theoretically cover 1 mile if the battery has 1.5kWh available.
I think Ford put the very smallest battery in this truck that would actually function.
The 1.5 kWh battery is about the same as a typical starter battery capacity.
I imagine with 15 kWh (easily hidden safely between the frame rails either side of the drive shaft) the Hybrid could achieve much higher mpg, but that would start to make the Lightning less interesting and I think at least for 2022/23, Ford wants to sell the Lightning by the millions and not have its main competition be the F-150 Hybrid.
I thing it would be pretty damn simple to take a primary circuit from the existing battery and put another couple of kWh of battery in parallel to see how the system behaved. I'm guessing it wouldn't "know" it have a 1.5 kWh battery, it would just be working off the capacity of the battery to absorb or produce power. The only problem being the Hybrid doesn't have two critical modes of operation normally available on a hybrid: 1) charge the battery and don't use it and 2) use only the battery and don't use the combustion engine. If the F-150 Hybrid had "Mode 1" it would continue to charge the battery and then it would be possible to switch to "Mode 2" for about 1 mile per additional 1.5 kWh added to the system. Of course there's also the performance envelope of the motor which might not like to work continuously for a much larger battery (it's duty cycle could be a limiting factor where it expects to be able to cool as frequently as the battery needs to be charged) but I'm guessing that little 40 hp motor is designed with the same specs as used in the Ford plug-in hybrid products in the Lincoln Aviator with 96 hp motor, a 13.6 kWh capable of 21 miles and 56 mpge … in other words, Ford already has the technology in one of their products to have offered the F-150 Hybrid as a plug-in hybrid with 15+ kWh of battery and I'm guessing at least 50 mpge and 15 miles' range with a 100 hp motor … but again, that would take sales away from the Lightning.

There's a stretch of downhill on my regular drive that allows me to stay on battery for more than 2 miles, but on average I'd say that about one mile is the most I can expect from the battery before it's needs a charge. It helps to keep your speed down below 35 MPH and don't run the A/C.

I've had a few trips through town where my battery time was 50%, but again on average it's closer to 20% I average 10% electric miles around town and less on the highway. Of course my truck has a 4" lift and 35's and 20" wheels so its pushing a lot more weight then OEM. Like most people have stated, downhill its almost unlimited, uphill almost non-existent, and flat ground depends on battery charge and how gently you ride that pedal. For me, everyone I know who has a 4" lift or higher on a full size truck average between 7-13 mpg (7 for the guys rocking 8" lifts and even bigger ties and 10-13 for a 4" lift with 35's). I'm averaging 13-17 mpg depending on highway/city and incline which is way better than most lifted trucks so I'm happy. 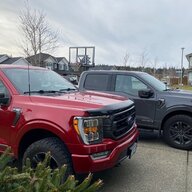 Last 2 tanks - I am averaging around 35% electric (60% city and 40% highway). This is running 2" level and 34's. I have had to trick the truck to go into electric mode at slower speeds by tapping the brakes on downhill or level ground drives to achieve the higher % electric mode and a little easier on the throttle. Still achieving 10.5L/100km with the setup. Also, been noticing as the motor breaks in more the fuel economy has creeped up.
Rapid Red 2021 - F150 XLT PB FX4 Sport SCrew 302A/7.2kw Pro Power/moonroof/2" leveling kit/ 295/60R20 Toyo AT3's/TruxedoTonneau powerboost_21 said:
Last 2 tanks - I am averaging around 35% electric (60% city and 40% highway). This is running 2" level and 34's. I have had to trick the truck to go into electric mode at slower speeds by tapping the brakes on downhill or level ground drives to achieve the higher % electric mode and a little easier on the throttle. Still achieving 10.5L/100km with the setup. Also, been noticing as the motor breaks in more the fuel economy has creeped up.
Click to expand...

that's really good with the level and tires!!! Going from a dead stop isn't easy for the electric drive. It's having to push this truck's heavy ass from 0 mpg to moving, assuming level ground.

Much better results are gained from riding your inertia. The electric motor isn't all that big.

toyko joe said:
20%! That is so much more than I get. I am getting like 1:10 maybe closer to 1:14. I am going to start tracking trip summaries for better data.
Click to expand...

You could just set Trip A to run indefinitely and see what that shows. My cumulative is about 1/6 electric, and I drive more highway than freeway miles for that purpose. But most of my freeway miles are pouring it going to work. My total mpg is about 21.5. (5.5’ bed 4wd, in 4wd when snow/ icy)
Seems like would have to really hypermile it to get 24 mpg. Almost impossible to start out all EV. Can be done, but not with anyone behind you. I can consistently get about 20% electric mode when making an effort in local driving - and only when the truck is empty. When actually used as a truck to haul or tow, the EV is essentially added weight, dragging the numbers down. I can get 23-24 MPG empty. With a light tow (under 5,000 pound), 8 mpg. Pulling the big boat at max towing specs (9,750 pounds, using all but 25 pounds of the payload spec), 4.8-5.1 MPG, and achieves zero electric miles.
Advertisement
You must log in or register to reply here.
Share:
Facebook Twitter Reddit Email Link

Can you get a secondary battery for the engine?
2

4 Auto and Running on Electric

If you had to order again would you still get the PowerBoost motor?
6 7 8

Love the torque but also find myself trying to get to All electric as often as possible.
2