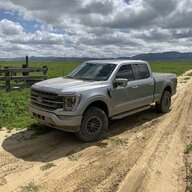 Between all of them , they are all great choices. I will say one thing on the GM beds is they do great tie down points.

9663mu said:
Between all of them , they are all great choices. I will say one thing on the GM beds is they do great tie down points.
Click to expand...

Since my truck is my personal work vehicle I have noticed the extra width and length of the short box on the Chevrolet to be much better than Ford. I haven't counted but I believe 12 tie downs are standard in the bed and additional tie downs can be purchased and installed in any of the grommets for a max of 9 additional points.


Updates:
I have noticed the 22LTD RST vs 22 Refresh LT Trail Boss MPG difference is roughly 3-4mpg; I believe the sweet spot would be an RST with 18's with the diesel. As of right now with 60% city and 40% highway I am at a lifetime of 23.7mpg.

-My oil life monitor says I am at 83% with no extended idling and not quite 1500 miles.
-Half a gallon of DEF, no towing.
-The new infotainment system has locked up randomly 4 times so far.
-Had to call onstar for paid Wi-Fi hotspot fix as it would not connect.
-Dropping the fob between the console and seat is an issue that needs to be addressed. It can and will go under the carpet.

With Diesel at $4.99 and Premium (93 octane) at $4.27; The diesel is more expensive considering fuel filter changes and DEF. I am looking forward to the 5.0 and Powerboost I have ordered. 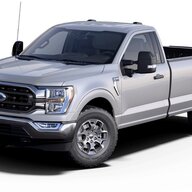 AntyRun said:
To be honest, this problem has troubled me for a long time, but in the end I chose the F150
Click to expand...

Had I been able to buy a brand new 2006 Silverado to replace my old one, I very well might have. I think it was just the right size and the 4.8 V8 was a great little engine that gave me 18MPG consistently regardless of what I was doing. I didn’t have a single issue with the truck the entire ten years I owned it other than the window regulators, a blown door speaker and the instrument panel backlight.

My main problem with the new GM trucks is that they look so oversized that I didn’t want to have to park any of them. Looking at the specs, they are only an inch wider and three inches longer than my truck.

One petty reason for going with Ford is that both the Chevy and GMC online configuration tools and websites would develop major issues requiring me to clear my cookies if I wanted to change trim levels.


9663mu said:
Between all of them , they are all great choices. I will say one thing on the GM beds is they do great tie down points.
Click to expand...

I would like to have a discussion with Ford about where they expected me to attach ratchet straps, bungees and rope. For an 8’ bed truck; the available tie downs are an embarrassment and wholly inadequate. BoxLink is a stupid gimmick.

Here is my thought on the bed tie downs. I’m absolutely no expert.
Could it be that since the Ford is the only one with a fully aluminum bed , they can’t do tie downs in places GM has them? Particular middle of bed/over wheel well and also up front of the bed where it meets cab? GM bed is still steel from what I’m seeing.

With my Silverado I paid $400 to add the Amp Research swing out step but is was not a great solution for getting up into the bed. The Ford rear step and grab post is the best solution to date for any pickup. Ram has a good tailgate option but the cost to get it is $2,000. Toyota has the worst tailgate of any 2022 pickup and one really needs to carry a step ladder to get up into the bed.

When researching new pickups there were two must have items and these were a large gas tank (no longer legal to swap out the factory gas tanks) and true locking rear differential. With GM one cannot get the large gas tank as an option with the 1500 trucks and there is no locking differential option or even limited slip. You get with the GM trucks "anti-spin" rear ends where the brakes are applied to the faster spinning wheel. 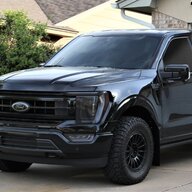 I had a 2012 extended cab Sierra 2012 SLE, 2020 GMC Sierra Elevation 4x4 which would be more equivalent to an XLT so this may be an unfair comparison to my 502A Lariat but the Ford is a much better truck. I never had a single issue with the Sierras. I drove the 2012 for 4-5 years and put 30,000 miles on it during that time. Nothing but oil changes only. Gas mileage was horrible though. That one had the 4.8L V8. The 2020 with the 5.3L was no better in the gas mileage department. Thirsty ass V8s.

One thing that did annoy me was even the base Sierras come with LED bed lightning and you had to pay for those in a package in a Lariat haha. Annoying! 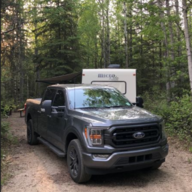 diambo4life said:
I had a 2020 GMC Sierra Elevation 4x4 which would be more equivalent to an XLT so this may be an unfair comparison to my 502A Lariat but the Ford is a much better truck.

One thing that did annoy me was even the base Sierras come with LED bed lightning and you had to pay for those in a package in a Lariat haha. Annoying!
Click to expand...

If you're comparing Elevation to XLT, the Elevation also has Auto 4x4.
Need to up to a Lariat in a F150 to get it.
Funny enough...or not depending how you look at it, my '22 XLT 302a had bed lighting included as part of the 302a package. (Canada vs. US trim difference I guess)

Yeah....i don't even remember the Elevation having 4-auto but you're right...it did. Here are pics of my old one. it was a good looking truck. GregBC said:
I've been spending quite a bit of time researching F150's and am pretty sure I'll (eventually...!) go for one ($ & availability pending, lol). Likely it would be a 4x4, SCREW, 5.5 bed, XLT-level, likely the 2.7L or MAYBE the Powerboost (mostly because I have an illogical dream of boondocking someday but I believe the 2.7L will otherwise fulfill 99% of my needs).

But was curious if anyone has owned or seriously considered the GMC Sierra 1500 series or Silverado series? I mostly ask because I found out a neighbor who I've met multiple times is a senior dude at a local dealer. While I haven't talked to him yet on this subject, I have a sliver of hope he would be able to help a bit more on pricing than just a random dealer guy further away.

From my research so far, it really does appear the F150 has a bit more 'bang for the buck' in terms of payload/towing capacity. I gather the GMCs are a bit pricier but are supposed to be a bit nicer/more features. I'll definitely test drive all 3; as a newbie to trucks, I'm not really emotionally attached to ANY brand (my current vehicles are Honda & Toyota but am not interested in Tundra, Ridgeline or Tacoma). I'm also not interested in the Ram - sounds silly, but I don't really like the looks of them, and a mechanic friend of mine says nothing but ill things about Rams (he owns 2 Fords and recommended GMC to me as well).

Anyway, notwithstanding any loyalties here (on an F150 forum, haha), did anyone else test more than the F150, come from a newer model GMC/Chevy, or even go back to a GMC/Chevy?

1733 miles and collision detection system light is on my dash, several other safety things I don't use are not functioning either. I believe the front camera needs to be replaced which is on backorder.
You must log in or register to reply here.
Share:
Facebook Twitter Reddit Email Link