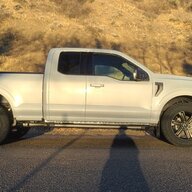 GM interior is much improved....and it needed it.
GM doesn't have an engine I want....had the 6.2L already and refuse to run premium for less mpg(nice power tho).
The diesel would be my only choice but don't want a diesel.
Gas tank is pathetically small on the GM.
My last GM was littered with rust spots after a year,gravel driving and lots of salt in winter are a bad combination.
Looks are subjective....I like the looks of the GM.
Overall engine choice,small gas tank and aluminum body....big reasons why I bought another F150.

FINALLY got a chance to drive both. The Chevy was a 22+ Trail Boss (I think a Custom TB, slightly lower version) with 2.7L engine. F150 was 2020 Lariat fully loaded. So hard to really compare amenities.
Both drove fairly similarly IMO. The ford dealer allowed me to test it (it’s a used vehicle obviously) over night so I had a longer time. I didn’t ask Chevy dealer for same option, and only had 30min in my personal schedule.
F150 seemed to have bigger blind spots behind the pillars; didn’t notice that on theChevy.
Chevy had a 2” lift; didn’t notice a big difference to the F150 but not something I’ll get. Chevy also has this black thing on the hood what is strictly for looks (but ends up limiting fwd vis a bit more).
Chevy had cloth seats, Lariat leather. Maybe I’m just used to cloth seats from last 15yrs but I liked the cloth better. Didn’t notice any was better or worse than another (some comment that Chevys are immediately uncomfortable).
360 cameras- man, this is AWESOME! The Chevy didn’t have it so it’s definitely an option I’ll want.
Flex gate vs step- bothseemed to work well. The flex gate step won’t work with a hitch installed but there are still side-step cutouts in their bumpers. Not sure why Ford doesn’t do the same.
Centre console - the Chevy was a 6-seater and I thought it’d centre console was fine. It didn’t have the rear seat centre armrest tho, another option I would really like (it annoys me that XLT which has 99% of everything I want, has no rear seat centre armrest). F150 centre console had the older shifter which was nice; I can see why ppl are hesitant to accept the new fold-down shifter: if it’s not broke, don’t fix it.
Screen: didn’t play with either screens too much but the Chevy one is a little wider and seemed quite nice. I’m sure one can get used to either one soon enough. Again, I’ve had zero screens in cars my entire driving life so not a big deal to me.
Driving: again, they both seemed fine. Turning radius/getting into parking spaces seems equally treacherous on both, lol!

In the end it’ll probably come down to the $$. Ideally I’d like to choose between a f150 XLT payload pkg/FX4 and Chevy LT Duramax with max tow or off-road (non-lift) pkg. Those seem ROUGHLY equal in options, capabilities, and costs. 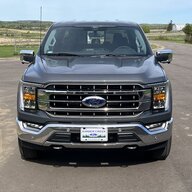 Biggest drawbacks I see— I cannot get snow plow prep on the Silverado, only on the Sierra, it is a $450 option vs $50 on the F150, plus you cannot get an extended range gas tank.

The design of the front of the GM trucks greatly reduces the effectiveness of the headlight to light the road ahead. This has been noted by more than a few truck safety reviews.

With GM you are stuck with a 24 gallon gas tank. No option as with Ford and Ram to get a larger factory gas tank and increasey your driving range. Best in this regard is Ford with its 36 gallon gas tank.
The number-one cause of death in children in the United States between the ages of 1 and 19 is gun violence.
OP
OP 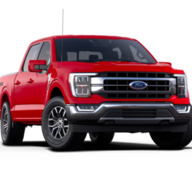 Calson said:
The design of the front of the GM trucks greatly reduces the effectiveness of the headlight to light the road ahead. This has been noted by more than a few truck safety reviews.

With GM you are stuck with a 24 gallon gas tank. No option as with Ford and Ram to get a larger factory gas tank and increasey your driving range. Best in this regard is Ford with its 36 gallon gas tank.
Click to expand...

Yeah, the headlights on the Chevy Silverados arent as large as they are on the F-150. Toyota actually used to offer a 38-gallon tank on the previous-gen Tundra, but the redesigned 2022 have a bit smaller tanks now, ranging from 22.5 to 32.2 gallons. So yeah, the largest gas tank in the half ton truck segment is now the F-150.