Ha! Toyota is copying Ford now..... What do you guys think?


Tundra vs. F-150: The Drive
Both of our test trucks were powered by twin-turbo V-6 engines—a 3.5-liter unit for the F-150 and a 3.4 for the Tundra (though Toyota's sales literature says otherwise). Note, however, that the EcoBoost engine is a $2,595 option in the Ford; standard power is a 3.3-liter non-turbo V-6 with half as much torque. The Toyota, meanwhile, gets twin-turbo power as standard. (Both the Tundra and F-150 are available with an optional hybrid powertrain, but only Ford offers a V-8.)
The F-150 provides a lot of go for the extra dough. Although its 400 hp and 500 lb-ft of torque bests the Toyota by only 11 hp and 21 lb-ft, the aluminum-bodied F-150 weighs a quarter-ton less than the Tundra. In addition, both come standard with a 3.31:1 rear axle, but our Ford test truck came with no-cost optional 3.55:1 gearing, which the Tundra doesn't offer. All of the above gave the F-150 a serious speed advantage: We clocked the Ford from 0 to 60 mph in 5.3 seconds, which is almost a full second quicker than the Tundra. And Ford's EPA fuel economy numbers measure 1 mpg better in city, highway, and combined measurements. Out on the open road, the Ford felt like the more powerful truck, and it delivered slightly better fuel economy during our testing. 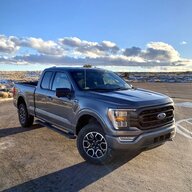 If you read the whole article Ford beats the Tundra in almost every category. 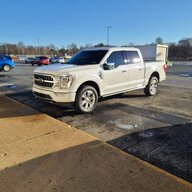 Ryan74 said:
If you read the whole article Ford beats the Tundra in almost every category.
Click to expand...

I actually saw an article somewhere today saying the 23 Tundra is the only truck they recommend NOT to buy right now.. I almost bought one too, but after a month of owning a new Camry, I've come to learn that I HATE Toyota and will never own another one. I'll take a Ford in the shop a month a year versus a 200k mile perfectly reliable Toyota any day.
You must log in or register to reply here.
Share:
Facebook Twitter Reddit Email Link